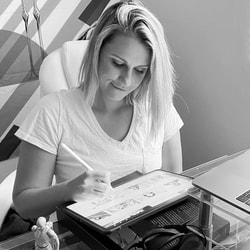 ​Bridget is an accomplished storyboard artist with a strong background in production and photography. She began her career working on feature film sets in the art department alongside Academy Award winning production designers and directors. As she gained valuable exposure to the film-making process, Bridget honed her skills as a freelance storyboard artist, merging her love of film and drawing. Bridget continues to storyboard a wide array of projects including features, shorts, commercials and television shows. Her breadth of experience and extensive knowledge of the film-making process provide a strong foundation in communicating with directors and producers.

Bridget's TV credits include: Silicon Valley, Insecure, Barry and The Flight Attendant for HBO. She has also worked on House of Cards, and YOU for Netflix. Film credits include Warner Brother's The Conjuring 3: The Devil Made Me Do It  and Disney's Hocus Pocus 2 in which she worked closely with the visual effects department to create extensive storyboard sequences.

​From pre-production, rough shooting boards, to final presentation, Bridget knows "the process" and is an ideal hire for any storyboard project.